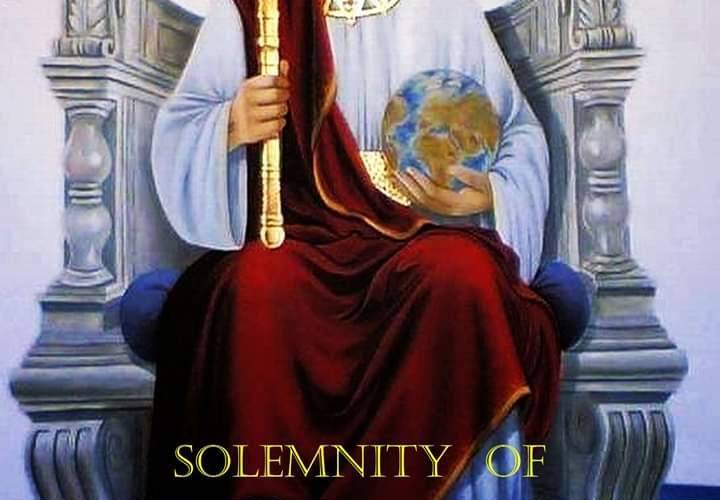 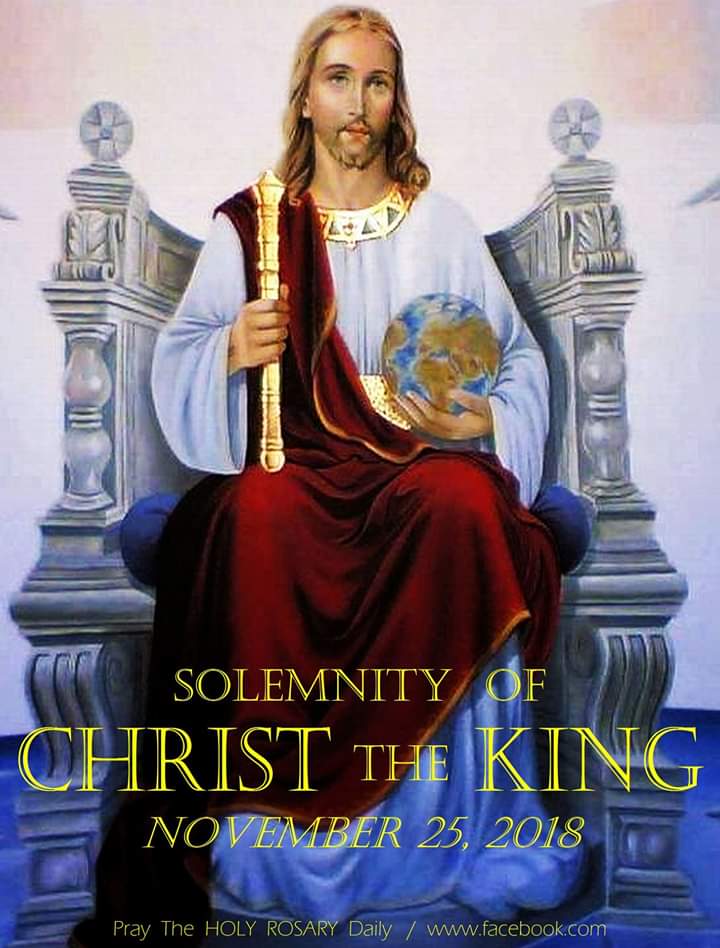 THE REIGN OF CHRIST Today, we celebrate the feast of CHRIST THE UNIVERSAL KING. Is he really King?

Once, after Jesus had fed a crowd of over 5000 people with only five loaves and two fish, they wanted to “take him by force and make him King.” (John 6:15) Jesus would have none of it. So, he ran away. Then at his trial, as found in today’s gospel text, Pilate asked Jesus if he was a King. Quite uncharacteristically, Jesus replied, “Yes, I am a King. For this I was born, and for this I came into the world, to testify to the truth. Everyone who belongs to the truth listens to my voice” (John 18:37). So is Jesus a King or not? On the one hand, he did not want to be a King. And here he is declaring himself king! The apparent contradiction is resolved by what Jesus had said earlier. Prior to this, he had said, “My Kingdom does not belong to this world” (John 18:36)

When Jesus makes the statement: “My Kingdom does not BELONG TO THIS WORLD” (John 18:36), that is not understood to mean that the Kingdom of Jesus is not IN THIS WORLD, or this world is not part of his Kingdom. Rather, what it means is that the Kingdom of Jesus is not like any kingdom in this world. For one thing, it is not a PHYSICAL OR MATERIAL KINGDOM. It is rather a spiritual Kingdom. It is to be found in the hearts of men and women. In that sense, it is probably better to speak of the reign (RULE) of Jesus than of his Kingdom.

But there is a condition for anyone to inherit a place in that heavenly kingdom. When we pray in the OUR FATHER “your kingdom come” because we want to start living his kingdom here and now. In order to begin establishing that Kingdom here on earth St. Matthew tells us:

“When the Son of Man comes in his glory, and all the angels with him, then he will sit on his glorious throne. Before him will be gathered all the nations, and he will separate people one from another as a shepherd separates the sheep from the goats. And he will place the sheep on his right, but the goats on the left. Then the King will say to those on his right, ‘Come, you who are blessed by my Father, inherit the kingdom prepared for you from the foundation of the world. For I was hungry and you gave me food, I was thirsty and you gave me drink, I was a stranger and you welcomed me, I was naked and you clothed me, I was sick and you visited me, I was in prison and you came to me.’”

Yes, we can help establish the kingdom of Christ here on earth by feeding the hungry, giving water to thirsty, clothing the naked, welcoming the stranger, visiting the sick and those in prison. That is the calling of all Christians, to establish the kingdom of Christ on earth here and now, so that when our earthly pilgrimage is ended, we may inherit the eternal kingdom in its fullness.

The solemnity of Christ the King challenges us, Christians, to examine our conduct to the Truth, because our citizenship of the kingdom or reign of Jesus depends on that commitment.

My dear friends, everything being equal we would processing round this town with Jesus Christ in the Blessed Sacrament. It is not his symbol or his representative that we carry in procession. It is Christ himself. It is the same Christ who walked the streets of Nazareth, healed the sick, and cured the lame and the blind. It is this same Christ who is going to walk through our town today. He the same Christ over there in the Tabernacle. Look at him in the face and put all your problems unto him. He is the one who said “Come to me all you who labour and are over-burdened and I will give you rest.” Many of us are sitting here with all kinds of problems: A) Choose to belong to kingdom of Christ, B) Acknowledge him as you Lord and King, and C) Put your problems before Christ the King and he will help you.

However, let us not pretend in this exercise. If anyone knows that he/she has another king other than Christ, let him/her not waste time making a public show. If anyone has some small bag round his/her waist or is involved in occult powers, let him/her not waste time, dancing with Jesus today. When the procession moves, let him/her take the side road and escape back to his/her earthly kingdom of lies and death, of injustice, hatred and war. In our adoration, today we want to show the world, who we believe in. We believe in Christ the King of kings and the Lord of Lords.

May Jesus the King of kings give us the grace to accept him in our lives, put him first in everything we do, so that when our earthly span is done, he may welcome us in his Kingdom, where he lives and reigns with the Father and the Holy Spirit, One God forever and ever. Amen.

This site uses Akismet to reduce spam. Learn how your comment data is processed.